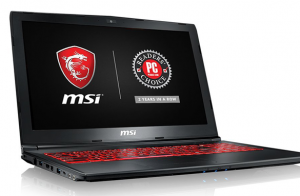 The MSI GL72M 7RX-800 comes with a large 17.3-inch display, a whole 1.7 inches larger than their GL62M range of gaming laptops that come with 15.6-inch displays, making it the only laptop we have in this guide that boasts such a large display. Its case is made from matte black plastic that’s a fingerprint magnet, but most have found that it feels durable and solid in hand, leaving a good first impression with most. The SteelSeries keyboard is ergonomically designed, offering good key travel and the familiar red backlighting, It has a range of connectivity options, including USB 2.0, USB 3.0 and USB Type-C, which sadly does not support Thunderbolt. Its HDMI port does support 4K resolution monitors, but only at a 30 Hz frequency. The display has a resolution of 1920 x 1080 and it was well received by most reviewers, but the TN panel is a bit disappointing. The IPS displays are superior in their color representation as well as their viewing angles, but they can push the price up a bit. The MSI GL62M 7RDX-1408 does come with an IPS display that is better overall, but you’d have to settle for a smaller display as mentioned above. The included GTX 1050 does offer a reliable performance regardless, and running games at 1920 x 1080 will see you comfortably clocking 50-60 FPS for most games, but some, such as The Witcher 3, will require you to lower the settings quite a bit. The Intel i7-7700HQ CPU and 8GB of RAM will comfortably run most things that you throw at it, and the 128GB SSD M.2 SSD will make your system act fast. MSI have included a large 1TB 5400RPM for those massive game folders that easily exceed 50GB we so often see today. Running demanding applications or hardcore gaming also sees the system running cool thanks to the Cooler Booster 4 technology. This also leads to the fans running quietly compared to those on systems that heat up underload. Notebookcheck have found that the battery life is not that good, with their web browsing test lasting around 3.5 hours, and only around 40 minutes under load, with the brightness set to max.

At under $900, the MSI GL72M 7RDX-800 17.3-inch will provide you with good gaming performance and it will cruise through day to day tasks with absolute ease, despite its shortcomings with its display.

MSI has given its entry-level 17-inch GL72 a hardware update. The new service package is enough to enjoy Full HD resolution adapted to the current gaming world. However, the device cannot offer any other improvements or innovations. 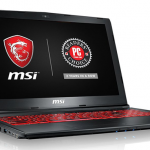