If you are looking to play modern day AAA titles in 1080p comfortably without breaking the bank, then Dell have the right laptop for you. The Inspiron 15 7567 15.6-inch is a budget friendly laptop that is packed with great hardware and it comes in an aesthetically pleasing case that is not too aggressive in its looks, but perfect for everyday use as well. The 15.6-inch display IPS display is said to be good overall, and it said to be crisp and clear for the most part, with some wide viewing angles. The 7th Gen Intel Core i5-7300HQ CPU and 8GB of DDR4 RAM combination keep things running along nicely, handling both demanding applications and multitasking quite comfortably. Throw in the NVIDIA GTX 1050Ti, and the 256GB SSD, and you’ll be running most modern AAA titles comfortably on medium to high at 60fps. Games such as PUBG and GTA V will be able to run decently on this laptop, and it won’t even break a sweat on the older classics like Dota 2 or League of Legends. The 256GB SSD is slightly small, and if you a have monstrous gaming library, then it will fill up in no time. Its battery life is long under moderate usage, and it can last up to 10 hours according to some testing sites like Notebookcheck, which really is impressive. This means that your gaming laptop can double up as reliable work laptop too that you can carry with you. Sadly, the audio quality is not the best, and it doesn’t come with USB Type-C. Some also thought that the arrow keys are slightly small and tricky to use due to this. However, at this price point, the Inspiron 15 7567 is incredibly capable and reliable, and anyone looking for a gaming laptop that is suitable for the office would benefit from this laptop.

The Dell Inspiron 15 7567 15.6-inch is suitable for the office and for at home use. It has an excellent battery life when used moderately and it delivers a highly commendable 1080p gaming performance.

Purchased this laptop for my daughter who’s a gamer and she loves it! The graphics and speed are impressive as was the affordable price tag! Highly recommended, you won’t be disappointed! 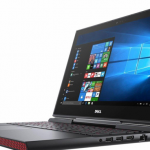 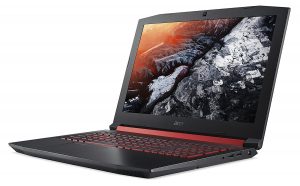 Acer have produced another entry-level gaming laptop that offers gamers great bang for their buck. This solid multimedia machine comes with a quad-core Intel i5-7300HQ processor and 8GB of RAM in a black and red case. Acer have fitted a good quality, matte 1920 x 1080 IPS display, but some noted that although it has good contrast, it can be quite dark. Although the 8GB of RAM is minimal, upgrading to 16GB won’t cost much and will help increase your laptops performance by quite a bit. The fast SSD allows for quick load and boot times, and it makes the overall system feel responsive and fast, but the 256GB will used up fairly quickly, so it may be advisable to get another SSD or HDD to increase your space. The Nvidia 1050Ti is a newer card, but it is an entry-card, and it won’t be VR-ready, but it will run modern titles fairly well. Most have noted that the keyboard is comfortable, and the red LED backlighting is a nice touch. The touchpad is responsive and performs well, receiving very little criticism from reviewers. The laptop runs a little hot according to some reviewers, especially when being stressed, and on top of this, the fans can get a little loud. The battery life is good if the Nitro 5 is used economically, lasting around 8.5 hours, but when under heavy load, it drains quite a bit quicker.

The Acer Nitro 5 15.6-inch gaming laptop has an affordable price tag and comes with decent hardware, but it runs hot under a heavy load and the storage space is quite limiting.

As for the games, I can run Dying Light, Gta V and Doom on high to very high settings with varying resolutions and achieve a stable 60 fps without the cpu and gpu overheating past 65. Very impressive, considering most of the reviews I had read complained of overheating issues due to the placement of the CoolBoost fans and venting system. This is evident on recent graphically intensive games like Ac Origins, but i achieve a stable 45 fps on medium settings and the temp rarely reaches 75, so these people must be running on ultra settings with the highest resolution. All in all, this was a very good purchase and I think the specs and price tag will please any person looking for a modern versatile laptop, be it for gaming or for work. 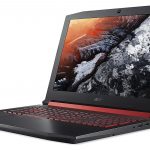