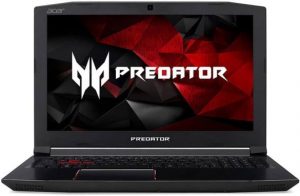 Acer are known in the gaming world for their Predator line of gaming hardware, however, most of their Predator laptops have been priced out of reach for many gamers.  The Acer Predator Helios 300 joins the Predator range as a more affordable solution, however, Acer have had to make a few sacrifices in order to offer its attractive price. The first thing that should be noted is that the display is dimmer than some of its counterparts and it doesn’t reproduce as many colors as the higher-end Predator laptops. However, the display is not all bad news, as you do get a Full-HD display panel which uses IPS technology for far better viewing angles and the quality is not terrible for gaming and streaming media. The Acer Predator Helios 300 is powered by a Kaby Lake Intel Core i7-7700HQ processor and is backed up by 16GB of DDR4 RAM. This will easily allow you to play your favorite games and will ensure that you can run even more intensive applications will little to no lag. While many of its competitors offer the GTX 1050 or GTX 1050 Ti, Acer have gone ahead and fitted the Acer Predator Helios 300 with an NVIDIA GeForce GTX 1060. This card offers better performance for AAA gaming titles and is more suited for VR gaming than the two entry-level NVIDIA graphics cards. The 256GB M.2 SSD offers fast boot and game loading speeds, however it is a bit small for modern games. Luckily, the Acer Predator Helios 300 ships with the cradle for a SATA based storage drive and you can easily install a 512GB or 1TB SSD at home. While the Acer Predator Helios 300 runs cool during everyday use, it will run hot while gaming or while you run more intensive applications. While this might put off some users, it is not at all uncommon for laptops in its price category and is not a deal breaker for many users.

The Acer Predator Helios 300 G3-571-77QK is an affordable Acer Predator laptop which even features a more powerful GTX 1060 compared to its competitors’ GTX 1050 offerings. However, the tiny amount of storage space needs addressing if you own a larger game collection. 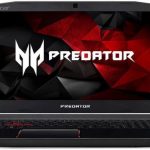